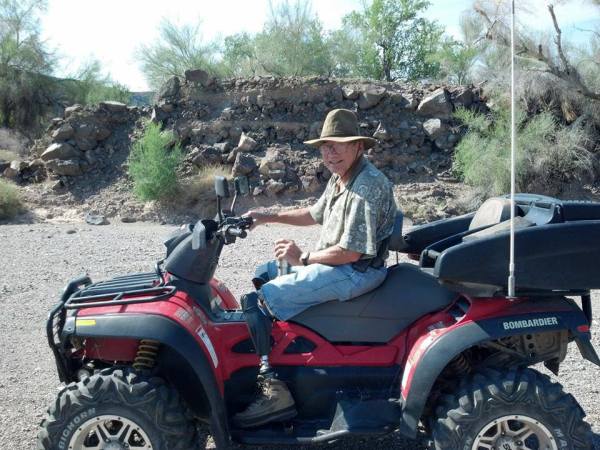 This is Allan today.

I recently made a new friend via social media – Facebook to be exact – his name is Allan Pederson and he shared his Vietnam story with me – I told him his story needed to be shared. Below is his personal account of his time in Vietnam, his experiences in country as well as in hospital. It’s an amazing memoir, one that he gave me permission to share as long as I didn’t change it. I hope you’ll take a moment or two to read Allan’s words.

In February 1970, I went to Vietnam as a US Marine Infantryman (a “grunt”). On the TWA flight over, we joked and were fairly cocky. I thought (and I think most of the others thought) that I would most likely be fine. That it was “the other guy” who would be killed. I also naively believed that small arms fire would be our greatest threat. Anyway, when the jet was dropping down to the runway at Danang, the plane became silent and the reality of the situation somewhat hit home.

We boarded a flatbed tractor trailer for the ride to the 5th Marine Regiment which was about 20 miles southeast of Danang at An Hoa. This truck was part of a large convoy which went to An Hoa every day. The road would be swept manually for mines at the front of this convoy and needless to say, the 20 miles took quite a while. Two Marines with metal detectors walked at the front of the convoy, one in front of each tire.

At An Hoa I was finally issued my rifle and sent out to my Company (H Company, 2nd Battalion, 5th Marine Regiment, 1st Marine Division, or, as called in the jargon: Hotel-2-5 or H 2-5 written as H 2/5). One of the first days I was with my Company I met a Sergeant who had been in-country for nine months. He was shaking like a leaf. I wondered whether I would be that nervous after I had been there nine months? Little did I realize then that the odds of me making it nine months were virtually nil.

I was 19 years old. I had stood on the yellow footprints the evening of August 19, 1969. I had enlisted in the US Marine Corps as I did not want to be a draftee. I had scored in the top four, of 360 recruits in my series. Us four were told that we had scored high enough to apply for Officers Candidate School (OCS), but we had to be 19 ½ to apply, 20 to be accepted. I was not old enough, not that I was sure I even wanted to apply.

I was in the Company Commander’s CP (command post) for a few days after arrival. This area was only about a half mile down the road from an ARVN (Army of Republic of Vietnam) fort. This was a log fort which looked like something out of the American West of a century ago. One night the ARVN started shooting in our direction. Bullets (tracers) were flying all around. I was in a bunker with Dennis Duzinski. We were looking out a single hole, with our heads side by side, when a bullet came through and hit the dirt behind us, right between our heads. Bruce Campbell was tired and decided he did not want to get up to get into the bunker. He laid on the ground throughout the “battle”. After a few minutes, the firing stopped.